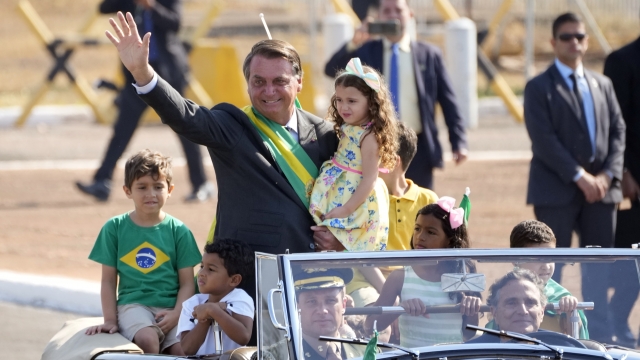 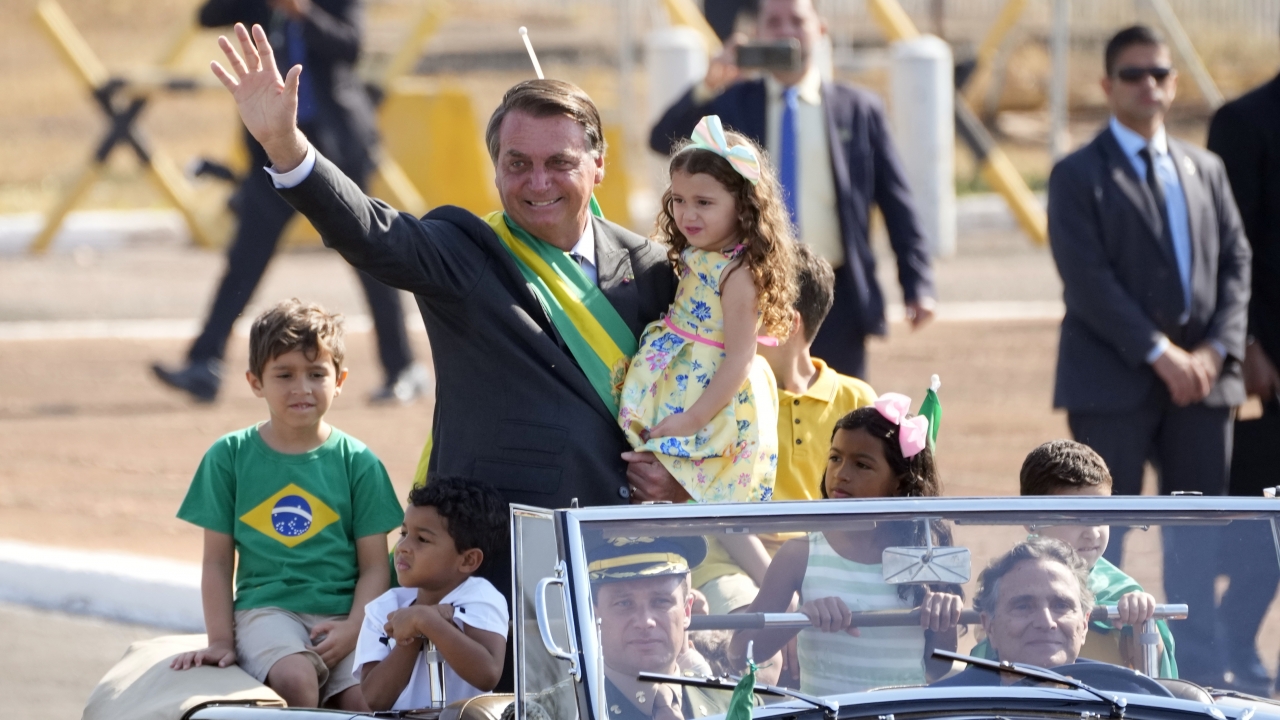 Thousands of demonstrators started arriving at the central plaza in Brazil's capital on Tuesday for Independence Day celebrations to support embattled President Jair Bolsonaro, who has vowed to issue an ultimatum to the Supreme Court.

Massive participation in rallies scheduled across the country would reinforce the right-wing leader's push to prove he is a strong candidate for reelection — despite slumping poll ratings — and recover momentum after a string of setbacks.

He also seeks support in his feud with the Supreme Court, which has been probing his allies for allegedly organizing anti-democratic acts and spreading false information.

But the demonstrations carry the risk of violence that could be perceived as stemming from the president's influence. Critics say they fear Bolsonaro could be preparing a tropical version of the Jan. 6 riot in Washington, where supporters of former President Donald Trump stormed the U.S. Capitol alleging he had been robbed of a reelection victory. Already, Bolsonaro has said he might reject 2022 election results if he loses.

Tens of thousands of people had already arrived in convoys of trucks and buses to Sao Paulo and the capital, Brasilia, where Bolsonaro was expected to speak at the two largest rallies.

The mood Monday at the Brasilia campsites was of anticipation, with bottles of beer passed around portable grills, but a general reluctance to speak with journalists reflected underlying tension.

On Monday evening, supporters broke through police lines set up to block vehicles and halt early pedestrian access to the capital’s central mall. Video on social media showed trucks advancing while blaring their horns as hundreds of people dressed in the national green-and-yellow colors walked alongside and cheered.

By morning, dozens of honking trucks were parked on the mall, where only pedestrians were supposed to be allowed. Regina Pontes, 53, stood atop a truck that advanced toward the police barriers preventing access to Congress and the Supreme Court.

“We just want to be in our home; You can’t close the door to keep the owner out,” she told The Associated Press.

She added Bolsonaro should depose all of the Supreme Court’s justices, and they be replaced with career public servants.

Security around the court was reinforced early Tuesday at its request, according to the press office of one of its justices, Luiz Fux.

Bolsonaro's government has been beset by crises that his critics say were at least somewhat self-inflicted. The nation’s COVID-19 death toll of more than 580,000 is the second highest in the world, and eighth highest on a per capita basis; a congressional investigation of the government’s response has produced a drumbeat of accusations of wrongdoing.

Inflation — traditionally the Brazilian boogeyman for presidential approval ratings — is approaching double-digits, with higher costs for mainstays like food, gasoline and electricity. And power prices are expected to rise more due to dwindling hydroelectric reservoir levels that were ignored for months. There may be energy rationing in store, further hamstringing any economic rebound.

The result has been a slide in Bolsonaro’s approval ratings, accompanied by a steadily climbing percentage of people saying they would never vote for him. Polls show his nemesis, former President Luiz Inácio Lula da Silva, could trounce him in a runoff next year if he enters the race.

Bolsonaro has set out to prove them wrong with Tuesday’s demonstration, whose organizers promised: “Sept. 7 will be gigantic!”

Bolsonaro said Sunday that he plans to address 2 million people in Sao Paulo — a crowd that size hasn’t gathered there in five years, when people demanded then-President Dilma Rousseff’s impeachment.

Tuesday’s demonstrations “may show that he has millions of people who are ready to stand up and be with him even when Brazil’s economy is in a bad situation, inflation near 10%, the pandemic, and all that,” said Thomas Traumann, a political analyst.

“If Bolsonaro feels he has the support of millions of Brazilians, he will go further in his challenging of the Supreme Court," Traumann added, speaking by phone on Monday.

Some centrist allies have implored the president to rein in his rancor when addressing crowds to avoid jeopardizing support from moderate voters and lawmakers.

Bolsonaro said last week that “no one need fear Sept. 7,” but the next day he portrayed it as a make-or-break “ultimatum.” Days earlier, outside an evangelical church, Bolsonaro said the only options for his future are to be victorious or die trying.

He has repeatedly claimed the Supreme Court is too powerful, violating constitutional limits, raising fears among critics of a man who has frequently expressed nostalgia for the nation's past military dictatorship.

He has requested the Senate impeach a Supreme Court justice who has jailed several of his supporters for allegedly financing, organizing or inciting violence or disseminating false information.

A 69-year-old farmer from Minas Gerais state, Clever Greco, came to Brasilia with a group of more than 1,000 others. He told the AP that Brazil’s conservatives back Bolsonaro's call for the removal of two Supreme Court justices by peaceful means. In another breath, however, Greco likened his trip to deploying for war.

“I don’t know what day I’ll go back. I’m prepared to give my blood, if needed,” Greco said. “We’re no longer asking; the people are ordering.”

Thousands of Indigenous people also remain camped out in the capital, having traveled there last month to pressure the Supreme Court and Congress on potential changes with scope to broadly limit territorial claims. They oppose Bolsonaro and his farm sector backers, many of whom came to Tuesday's demonstration.

Shirley Krenak, who oversees security at the Indigenous camp, said their people had been told to remain inside to avoid clashes.

The U.S. Embassy in Brasilia on Sept. 3 warned Americans to steer clear of protests that could turn confrontational.

Paulo Calmon, a political science professor at the University of Brasilia, said that Brazil doesn't see anything like the violence of Jan. 6 in the U.S.

“This is an important moment and surrounded by a lot of apprehension,” Calmon said before the protest. “The risk we see scenes of violence and an institutional crisis that’s unprecedented in Brazil’s recent history still remains and is considerable.”