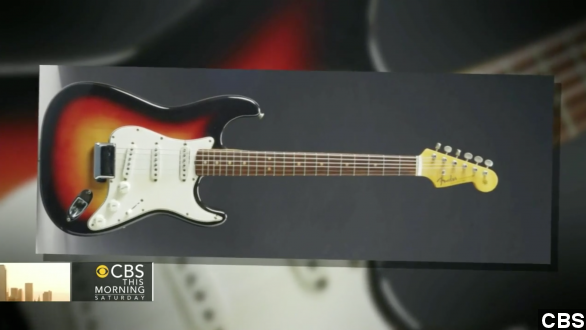 A piece of rock 'n' roll history sold at auction in New York Friday for a record-breaking price.

Dylan first used the guitar in his early 20s at the 1965 Newport Folk Festival. CBS notes the crowd at the festival booed Dylan for ditching his acoustic guitar. The change signaled his move from folk music to rock 'n' roll.

Interestingly, the BBC reports Dylan hasn't had the guitar for more than four decades. An American family has been keeping it since he left it on a plane back in the mid '60s.

The Wall Street Journal adds the same family that had the guitar said there was also a handwritten draft of lyrics to the song "I Wanna Be Your Lover" inside its case. That sold for about $20,000 at the same auction.

Rolling Stone points out the guitar's $965,000 sale was barely a record. It narrowly beat out Eric Clapton's famed guitar, "Blackie," which sold for $959,500 almost a decade ago.

The auction comes just one day after a handwritten lyric sheet for Bruce Springsteen's hit "Born to Run" sold at auction at Sotheby's Thursday for nearly $200,000 — about double what was expected. (Via KYW-TV)

Just like Springsteen's lyrics, Dylan's electric guitar exceeded expectations. WJW-TV notes it was expected to be auctioned off for $500,000.

Christie's auction house, which sold the guitar, didn't reveal the name of the Dylan fan who bought it.