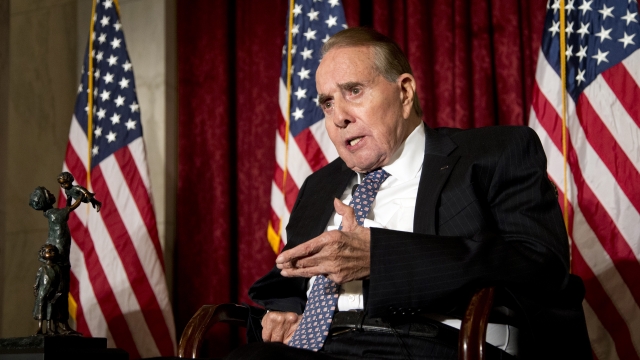 SMS
Former Senate Leader, Presidential Candidate Bob Dole Dies At 98
By Andrew Rafferty
By Andrew Rafferty
December 6, 2021
He shaped tax policy, foreign policy and rights for the disabled, and devoted his later years to the cause of wounded veterans.
SHOW TRANSCRIPT

Bob Dole, one of the most towering political figures of the last century, is being remembered for a life of service that went well beyond his conservative politics.

"At every stage of my life, I've been a witness to the greatness of this country," he said.

Dole got his start in politics in his home state of Kansas in 1951. He was later elected to the House of Representatives and eventually the Senate, where he spent nearly 30 years.

It was in Congress where Dole earned his reputation as a consensus builder, able to work across the aisle on issues like social security and food stamps — while also serving as Senate Republican leader for more than a decade.

He ran for president three times, securing the Republican nomination in 1996 before losing to incumbent Bill Clinton.

"It hurts to lose an election," Dole said. "But stay involved and keep fighting the good fight."

After politics, Dole focused his life on helping veterans, playing a key role in the creation of the World War II memorial in Washington, D.C.

"I can't explain the emotion and what it means to one of these 85-, 95-year-old veterans — mostly men, but some women — who get a chance to touch and feel the World War II memorial," he said. "It's probably the best thing that's happened to them in years and they're going to remember it the rest of their life."

Dole himself was nearly killed in the war, sustaining injuries that left his right hand mostly useless. And throughout his career, Dole fought for the physically impaired, helping to pass the Americans with Disabilities Act of 1990.

In the final years of his life, Dole was critical of the party he spent decades leading, calling for more compromise and pragmatism in Washington. He supported both of President Trump's campaigns but disagreed with the former president's claims of election fraud.

Dole himself is remembered for showing graciousness, not only in his political victories but also in defeat.

"So I leave y'all tonight with a full heart and a fervent prayer that we'll meet again and we will meet often in this land, where miracles are always happening, where every day is a new beginning and every life a blessing from God," he said.