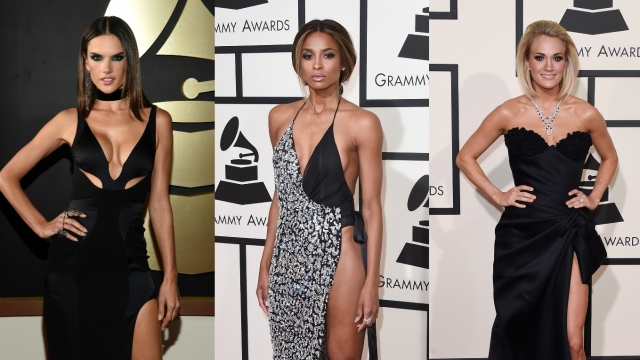 I wish I could say there was an overwhelming trend on the 2016 Grammys red carpet, but there wasn't. Instead, it was filled with skin, thigh-high slits and Taylor Swift doing her normal girl power thing.

We say that because while she didn't show up with her entourage from "Bad Blood," she did roll with her bestie, Selena Gomez, who looked fabulous in a navy sequin Calvin Klein cut-out gown.

Taylor, on the other hand, went with a color-blocked red and pink two-piece ensemble. Maybe she missed the memo that Valentine's Day already passed, or maybe she's craving a strawberry Pop-Tart. Either way, it's not necessarily a new look for her. Just Taylor being Taylor.

And over in the black-and-white corner, we have hands-down the sexiest looks of the night.

Victoria's Secret angel Alessandra Ambrosio — there's honestly not even a way to describe this look besides wow. The same thing goes for Ciara, who rocked a massively high slit alongside her beau, Russell Wilson.

And finally, Gaga channeled her former days of outrageous red carpet styles with an all-out tribute to David Bowie. She's performing in the late singer's honor later in the evening, but she also channeled him in her red carpet ensemble.

This video includes images from Getty Images and jill, jellidonut... whatever / CC BY SA 2.0.