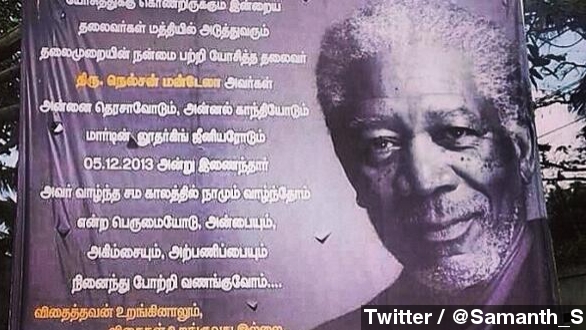 By Matt Moreno
December 19, 2013
A billboard in India reportedly mixed up the late Nelson Mandela and Morgan Freeman.
SHOW TRANSCRIPT

This is just a small error.

One person making a tribute to the late Nelson Mandela supposedly got him mixed up with actor Morgan Freeman. Awkward.

The billboard shows Freeman's face along with those of Mother Theresa, Gandhi and Martin Luther King. According to The Huffington Post, the writing reads: "Nelson Mandela was a leader who thought of the well-being of future generations. ... We bow down to him, proud to have lived during his time on earth and praise his message of love, non-violence and sacrifice."

​This photo was posted to Twitter and quickly went viral. OutlookIndia.com says the billboard, written in Tamil, is located in Coimbatore, India, near the middle of country, while Metro says it's from Chennai, more on the eastern side of India. Metro also says it's tough to verify the authenticity of the banner but quoted one Twitter user who was skeptical.

Intentional or not, it's not the first time the two have been confused for looking alike.

In fact, Freeman played Mandela in the movie "Invictus" at Mandela's suggestion.

"I, Nelson Rolihlahla Mandela, do hereby swear to be faithful to the republic of South Africa." (Via Warner Bros. / AFI / "Invictus")

Upon Mandela's death earlier this month, Freeman reacted by saying, ​"Today the world lost one of the true giants of the past century." (Via Variety)