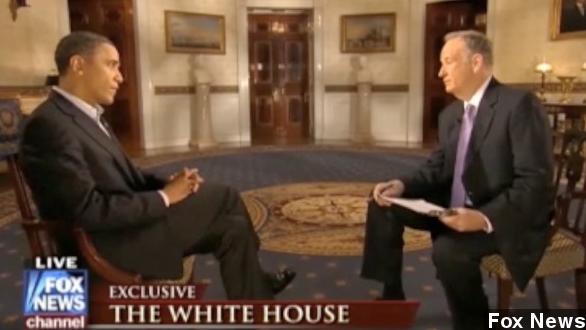 By Matt Moreno
January 23, 2014
Fox News host Bill O'Reilly will sit down for a live interview with President Barack Obama prior to kickoff of the Super Bowl.
SHOW TRANSCRIPT

Expect another colossal matchup on Super Bowl Sunday. Fox News host Bill O'Reilly and President Barack Obama will sit down for a live interview prior to the big game.

Fox News announced Thursday the two will talk exclusively on Feb. 2. But The Hollywood Reporter points out it's become mostly a tradition to talk with the president before the Super Bowl.

Deadline Hollywood reports O'Reilly and Obama will speak in a live interview about a variety of topics starting at 4:30 p.m. Eastern time. After the live portion is over, the two will continue a taped version of the talks and air that on Fox News' "O'Reilly Factor" the next day.

O'Reilly last interviewed Obama back in 2011 for the same Super Bowl pregame airing. That interview featured the president's views on violence in the Middle East, health care and, of course, football. (Via Fox News)

And a writer for The Washington Post says expect the same this time around — especially on health care. He says O'Reilly will likely go back to his 2011 interview and writes: "As O'Reilly suggested, he'd heard many times the president's rhetoric about people being able to keep their plans. ... Things have changed in the past three years, however."

The interview and the Super Bowl are scheduled to take place Feb. 2.