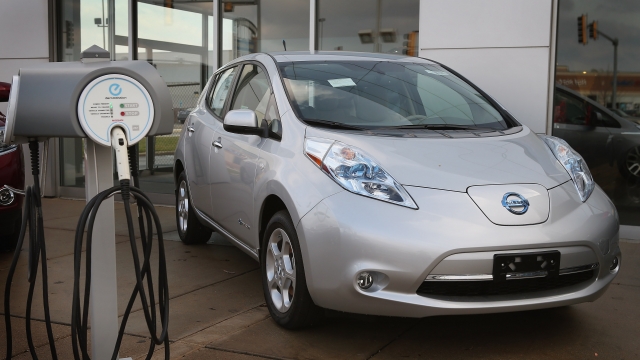 SMS
What Would It Take To Make Electric Vehicle Charging 'Comprehensive'?

By Evan Thomas
February 7, 2020
U.S. Representatives have a new bill that calls for electric vehicle chargers across the country. That would be a huge expansion of the network.
SHOW TRANSCRIPT

U.S. Reps. Andy Levin and Alexandria Ocasio-Cortez want to make travel by electric car as viable as any gasoline-powered trip. They've introduced a bill to do it: the Electric Vehicle Freedom Act.

"A bold proposal to create a national network of publicly available high-speed chargers along our nation's highway system within five years," Levin said.

The bill charges the government with figuring out specifics like where to put chargers or how they would be paid for. But any way you slice it, this would be a huge undertaking. Consider one of the nationwide networks we already have for our cars: gas stations.

One nationwide survey in 2012 estimated there were some 150,000 gas stations in the country. Today the Department of Energy counts a little more than 24,500 public EV charging stations across the U.S.

If an electric network were to match nothing more than the convenience and density of gas stations, it would have to expand to roughly six times its current scale.

But there are other factors to consider, too: The range requirements of combustion cars and electric vehicles are different. And if EVs catch on, it will still take time for them to replace gas-burning cars on the road. Even the largest of charging networks won't have to pop up overnight.