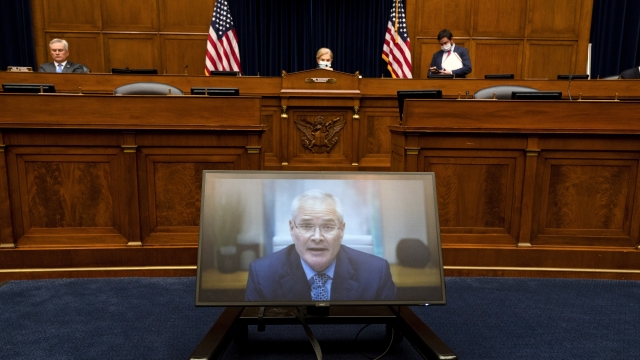 The CEOs of four of the oil industry's biggest players were peppered with questions by Democrats about the role of their companies in worsening climate change and whether they’re really committed to the cause.

Republicans only focused on their importance to jobs and the economy.

"We believe the future of energy is lower carbon and we're committed to being a leader in making that future a reality," Chevron CEO Michael Wirth said.

"We know we have a hard road ahead, but it's also filled with opportunities," BP CEO David Lawler said.

"We continue to advocate for sound carbon policies that support the transition to renewables and lower-carbon energy sources," Shell CEO Gretchen Watkins said.

Despite commitments, U.S. crude oil production is still rising — up 3% just in the past year.

The same is true of natural gas production — up 3.5% in the past year.

The oil industry's answer to this? The demand is there. In fact, they argue production isn't high enough. The industry insists no production is not an answer.

"Climate change is real," Sommers said. "Industrial activity contributes to it. And the challenges of ushering in a lower carbon future are massive."

But at the same time, the API is lobbying congress to end programs that make electric cars more affordable. It also opposes methane fees.

"You could do something here," California Rep. Ro Khanna said during the hearing. "You could tell them to knock it off for the sake of the planet. You could end it. You could end that lobbying. Would any of you take that opportunity to look at API and say stop it? Any of you?"

The oil industry executives swatted away claims that their companies have intentionally lied or deceived the public about the link between greenhouse gas emissions and climate change — despite evidence to the contrary.

Evidence, like a lobbyist for Exxon caught in a Greenpeace video bragging that Exxon worked with "shadow groups" to undercut climate science. The company fired him.

REP. JAMIE RASKIN: "Do you think that a company has a right to lie, for example, about climate change and then use the first amendment as a camouflage and a shield against litigation?"

DARREN WOODS: "I don't believe companies should lie and we do not do that."

The oil industry executives who testified each refused to pledge that their companies would not spend money to oppose efforts that reduce emissions. They also refused to commit to an audit to prove that they aren't funding any similar efforts now.