Bieber Spraypaints Hotel And Tries Surfing Down Under 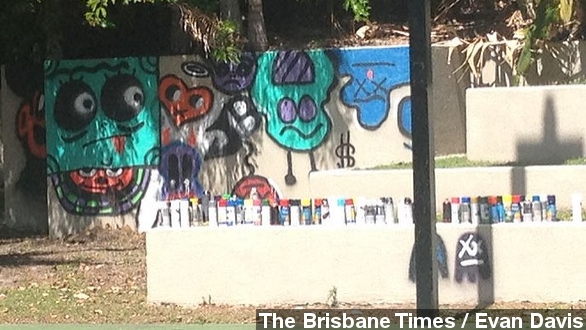 SMS
Bieber Spraypaints Hotel And Tries Surfing Down Under

By Erik Shute
November 28, 2013
Justin Bieber&#039;s world tour heads to Australia where the sing gets in hot water after spraying graffiti on a hotel.
SHOW TRANSCRIPT

​Justin Bieber got wet and wild down under as his world tour raged on in Australia, leaving yet another wake of strange behavior in its path.

Biebs recently left his mark, not on stage, but on the side of his Brisbane hotel — spraying graffiti to create this one of a kind, monster mural. And now, no one knows what to do with it, or why he did it. (Via Australia Ten News)

The 19-year-old pop star touted the fresh-painted wall on Instagram and amassed more than 550,000 likes.

One person not included in that number: Gold Coast Mayor Tom Tate. Australia’s 7 News reports, “The Gold Coast mayor is demanding Justin Bieber return to the hotel he vandalized to help clean it up… Tom Tate has a council graffiti clean up kit ready to go!” (Via 7 News)

Despite his remarks, TMZ reportedly spoke with a rep from the QT Gold Coast hotel who loves the new addition.

"[The hotel] has ZERO plans to scrub off his crappy artwork from its walls ... in fact, a rep tells TMZ, they're stoked the Biebs left his mark… It's unclear if they're also preserving the toilet he crapped in." (Via TMZ)

A spokesperson from Bieber’s camp agrees and explained in The Brisbane Times...

“This piece of art is now available to be viewed by fans of the artist and we believe that it is a wonderful addition to the colourful Gold Coast arts scene." (Via The Brisbane Times)

Another one of Justin's "wonderful additions" has previously gotten the "Boyfriend"-singer in trouble. The Hollywood Reporter refers to one specific incident involving Brazil authorities and an arrest warrant.

"Apparently he was spray painting a wall there which is illegal and now he's wanted by the police." (Via The Hollywood Reporter)

Down under, the tour continued rolling. Later, the pop star hit the beach for a quick surfing lesson.

However, Star Magazine reports Bieber’s public appearance drew a crowd and one of Bieber’s bodyguards allegedly snatched the cell phone from a surfer taking photos of the singer. Other surfers joined in to try and retrieve the phone and eventually got it back.

The surfing incident happened just days after police arrested one of Justin’s security detail for allegedly assaulting a photographer. And fortunately for the tabloids, the Believe Tour has given plenty of strange headlines.

In China, CNN reports his “minions” carried the 5’ 7” singer up the Great Wall of China.

And in South America, there were reports of the star sneaking out of brothels in Brazil, kicking the Argentine flag and this video of a girl filming Justin while he was sleeping.

Next stop New Zealand! There’s only a few more shows remaining on the 2013 tour, but that’s plenty of time to keep making headlines.