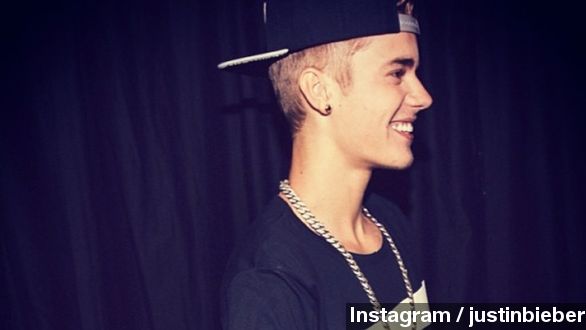 If there's one thing the Biebs isn't so good at, it's staying out of trouble.

BIEBER: "I got another one for you, actually!"

That video was shot by Justin Bieber's neighbor, who says the 19-year-old star trespassed and pelted eggs at said neighbor's house. (Via Island Records / Justin Bieber)

"Money can buy a lot of things, but apparently maturity isn't one of them. ... LA county deputies did show up at the Biebs' exclusive gated community in Calabasas after the singer allegedly threw two dozen eggs at his neighbor." (Via Fox News)

The neighbor told E!: "It was about 7:30 p.m. and I was in my house upstairs with my daughter. ... We went to our outside balcony and saw [Justin] standing in my front yard, ripping eggs at my house. ... My daughter was very frightened."

The pop star supposedly doesn't like this particular neighbor because the neighbor allegedly calls the cops when Bieber throws loud parties or speeds around in his car, something that's put Bieber and apparently this same neighbor in the spotlight before.

Back in March, the singer was reportedly speeding in his neighborhood, when the 47-year-old neighbor and father of three went on Bieber's property. The two exchanged feisty words, then Bieber allegedly spit in the man's face, according to the neighbor. Gross. (Via TMZ)

The charges in that case were eventually dropped after authorities couldn't prove it was the the singer's spit. (Via US Weekly)

As far as this most recent incident goes, police told People Magazine the investigation is still underway. The eggs reportedly caused more than $400 in property damage.

Bieber could be looking at a misdemeanor for trespassing and a misdemeanor or felony for vandalism. There's been no comment from his reps, but we're sure the naughty Bieber saga is far from over.