Which Ads Won The Super Bowl? 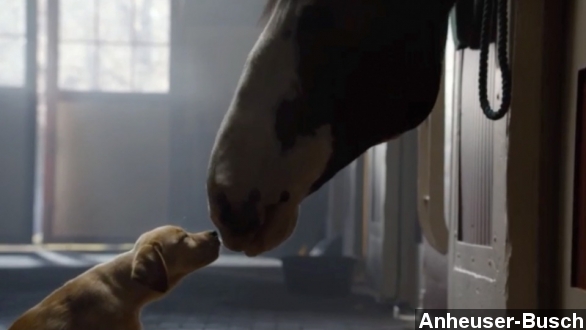 By Matt Moreno
February 3, 2014
Ad agencies trotted out their best on the airwaves and on Twitter for Sunday's Super Bowl.
SHOW TRANSCRIPT

It's the biggest game of the year for the NFL, but also a big deal for advertisers — with companies paying $4 million for 30-second spots. Here are the ads everyone's talking about.

To get ahead of the game, some advertisers decided to release their commercials early — like Budweiser, whose puppy-Clydesdale love story tugged on the heart strings.

NPR writes it won the hearts of the night's viewers.

In a bit of a surprise move, Radio Shack took a 30-second jab at — itself. (Via TIME)

"The '80s called. They want their store back. ... It's time for a new RadioShack. Come see what's possible when we do things together. "

And the move appears to have worked, with Forbes reporting "RadioShack stock surged over 7% in early trading on Monday."

Sunday also saw a few '90s throwback ads, with Jerry Seinfeld and George Costanza appearing in this ad to plug Seinfeld's web show, while the fatherly gang of "Full House" reunited in this Dannon yogurt commercial.

Coca-Cola's "It's Beautiful" ad was one of the most talked about — and polarizing — commercials. It featured the song "America The Beautiful" sang in multiple languages.

While some did find it "beautiful", it drew the ire of Twitter trolls with a flurry of tweets like this, reading "speak English". (Via Hollywood Life)

Speaking of Twitter, some advertisers decided to keep their money and try some free, viral marketing instead.

Like J. C. Penney who, at first, appeared to have partied too hard with these horribly misspelled tweets.

But it was all a marketing ploy. J. C. Penney says it was just tweeting with mittens on. Of course. And then there's Esurance...

Who decided to buy the first ad AFTER the game ended but still got fans interested.

"Just tweet #EsuranceSave30 and they'll give all this to one of you."

Yes, with just one tweet fans entered themselves to win a $1.5 million prize. And, as of Monday afternoon, Esurance was STILL trending on Twitter. (Via Bleacher Report)