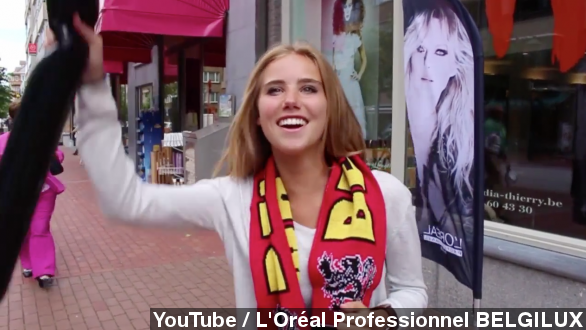 By Lauren Zima
July 10, 2014
The 17-year-old was spotted in the stands at a World Cup game. Her face went viral, and now she has a contract.
SHOW TRANSCRIPT

When being a fan gets you as famous as those you're watching.

​Making the headlines with plenty of puns — a "model" fan. A Belgium supporter spotted in the stands during a World Cup game has gone viral, and now signed a modeling contract with L'Oreal. (Via The Independent, Daily Mail)

It all started just a few weeks ago, but Axelle Despiegelaere has already appeared in a video on the company's YouTube page. It got nearly half a million views in just about a day. (Via YouTube / L'Oréal Professionnel BELGILUX)

​After she got attention for being in the stands, the 17-year-old smartly set up a Facebook fan page. On July 8th, she announced she'd signed with L'Oreal.

Social media definitely helped here, but fame from fandom has happened before.

Who can forget when A.J. McCarron's then-girlfriend, Katherine Webb, was spotted in the stands at one of his games by ESPN announcers? It got awkward... (Via Bleacher Report, Business Insider)

But she got a job as a Miss USA judge, an appearance in Sports Illustrated's swimsuit issue...

...a spot on a reality show and perhaps most famously, a Hardee's commercial.

Or, did you know that none other than Pamela Anderson got discovered at a Canadian league football game in 1989? (Via Getty Images)

People magazine reports when she was shown on TV, fans gave a big reaction. Soon she had a deal with a beer company, and soon after that — Playboy.

But we'll end on a story that's not just another sexy-girl-in-the-stands tale. Granted, this gal had to be a little more proactive.

She landed the role after going to an open casting call. But before that, she'd been a fan for years — even leaving the hospital to attend a book signing. (Via Warner Bros. / 'Harry Potter and the Deathly Hallows: Part I)

She told The LA Times, "I started reading the books when I was about 8 and didn’t get cast until I was 14. One of the producers came to my house and saw all of the posters on the wall and said that I had her life up on that wall.”

And now her poster is up on some soon-to-be-famous girl's wall.