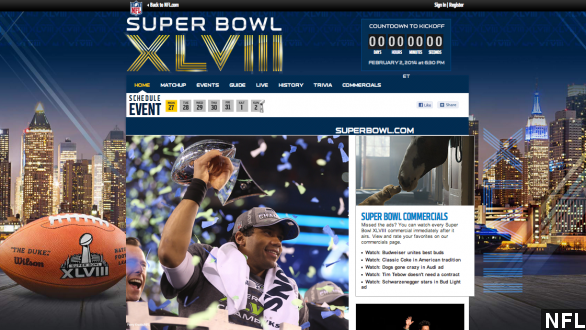 By Danny Matteson
February 3, 2014
It was the most watched TV event of all-time in the U.S., with some 111.5 million viewers watching the lopsided game.
SHOW TRANSCRIPT

Super Bowl XLVIII put out some good numbers, and some bad numbers on Sunday. First of all, that 43-8 score was downright ugly — but the number of people who tuned in? Surprisingly good.

Entertainment Weekly reports it was the most-watched TV event in the history of, well, ever in the U.S. — with some 111.5 million viewers watching the lopsided game.

That narrowly beat out the previous record holder — the 2011 Super Bowl, which as Zap2It notes, brought in about a half million fewer viewers.

This year's game also set the record for the most watched halftime show — with 115.3 million viewers tuning in to watch Bruno Mars and the Red Hot Chili Peppers. (Via Instagram / sllollaryee)

So, for such an incredibly dull game, how did the numbers get so high?

It likely had something to do with the always-popular ads. This year those included a John Krasinski-hosted Esurance ad announcing a $1.5 million giveaway.

And a surprise Seinfeld reunion at halftime likely had some viewers holding out a little longer than they would have otherwise. (Via Crackle / 'Comedians in Cars Getting Coffee')

Immediately afterward, the sitcom “New Girl” held on to 25.8 million viewers. That's likely due to it's choice time slot and the fact that Prince, a former Super Bowl halftime show performer himself, made a cameo. (Via Fox / 'New Girl')

Perhaps, the most interesting numbers from the big game come when you look at the specific cities where Super Bowl viewership was highest.

Surprisingly, Seattle pulled in only the second best Nielsen rating, while Kansas City, home of the Denver Broncos longtime rival, the Chiefs, was number one. (Via The Kansas City Chiefs)