Atlantic Ocean Might Be To Blame For Global Warming 'Pause' 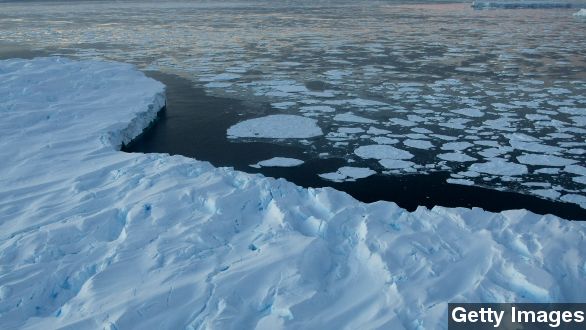 SMS
Atlantic Ocean Might Be To Blame For Global Warming 'Pause'

By Matt Picht
August 24, 2014
Researchers say a recent pause in rising global temperatures might be caused by currents in the Atlantic Ocean.
SHOW TRANSCRIPT

The so-called "global warming pause" that's caused global temperatures to stall for the past fifteen years has been a thorn in the side of climate scientists for years.

Global warming skeptics say the pause pokes a hole in the concept of man-made climate change: after all, since carbon emissions have been steadily climbing, why haven't global temperatures risen to match?

Climate scientists have proposed many answers to that question, from El Niño to volcanic eruptions, and none of them have really stuck. But a new paper published in Science this week claims to have found the missing heat: turns out, it's been hiding in the Atlantic Ocean.

The researchers tested their theory using measurements from the network of Argo floats currently studying the ocean's temperature and salinity at depths of up to 2,000 meters. Those measurements show a sharp rise in the amount of energy stored between 300-1,500 meters over the past decade — right as the "pause" started. (Video via BBC)

The scientists also observed an increase in the Atlantic's salt content during the same period, which seems to go up and down on a 30-year cycle. The paper suggests the ocean's salinity has something to do with the increase in stored heat — since saltier water sinks faster, more heat gets trapped beneath the cool water.

The study could represent an important shift in how we view the global warming hiatus. A writer for The Economist points out most people had been looking to the Pacific Ocean for answers up until now.

"Because the Pacific has previously been thought of as the world's main heat sink, fluctuations affecting it are considered among the most important influences upon the climate. ... But if Dr Chen and Dr Tung are right, then the fluctuations in the Atlantic may be more important."

But scientists aren't ready to relinquish the Pacific's role in slowing global warming. One researcher told The Guardian, "The hiatus really is a patchwork problem of lots of different things. ... This does suggest a role for the Atlantic but there's a lot more to it than that. ... It doesn't dispel the key role for the Pacific in the hiatus."

If the researcher's projections are right, we've got about ten years left before the cycle flips and the Atlantic starts releasing its heat. But the authors caution it's hard to predict what happens next with the climate, since there are so many variables involved.