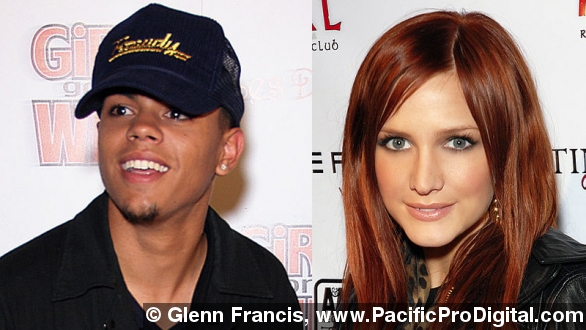 Ashlee Simpson is set to wed for the second time.

She Tweeted a photo of herself and new fiance Evan Ross Monday afternoon, with the caption "my baby love and I are ENGAGED!!! Hallelujah Hawaii!!!!!" She's sporting what looks like a very unique engagement ring.

No word on if that means they got engaged in Hawaii or if they're getting married there.

And Ross Tweeted the same photo, saying "The love of my life said YES!!!!!!" Plenty of use of exclamation points.

The pair seemed serious by August, when Ross was spotted spending time with Simpson's 5-year-old son, Bronx Mowgli. Ross told The Insider in November she was the one. (Via People Magazine)

EVAN: “It’s amazing. I’m so in love, and we got amazing things going on. We inspire each other, so it’s cool.”

MICHAEL: “I like that, look at him. Look at that smile. Look at this.”

Bronx is Simpson's son with her ex-husband, Pete Wentz. They split in 2011 after three years of marriage. (Via MTV)

So, this will be the second marriage for Simpson, the first for Ross. Congrats to the happy couple.