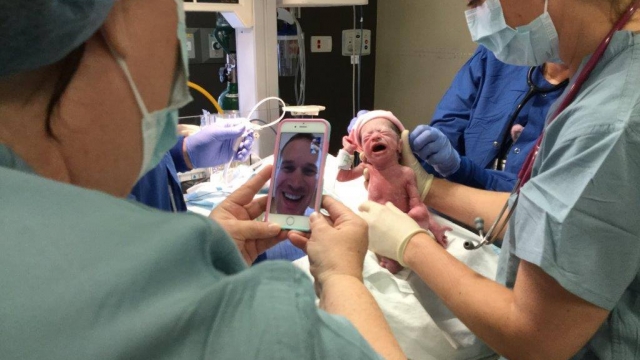 Army Capt. Tony Burch was more than 6,500 miles away when his wife, Mary Pat, went into labor with their quadruplets in Illinois.

But he was able to see their birth, thanks to a little help from technology.

On FaceTime, Tony — who was deployed to South Korea in September — watched his three sons and daughter come into the world at AMITA Health Adventist Medical Center in Hinsdale.

Mary Pat said in a statement, "He could see the babies as they were taken to the warmers, and he got the rundown on how they were doing and how much they weighed."

And four days later, the proud father got to hold the adorable new additions to his family.

"Perfect timing, you know, everything clicked together, and I was able to see the babies as they were getting cleaned off," Tony told WLS-TV.

According to the hospital, Mary Pat was discharged four days after the quadruplets were born. The babies are expected to be released in a few weeks when they'll meet their big sister, 23-month-old Alice.