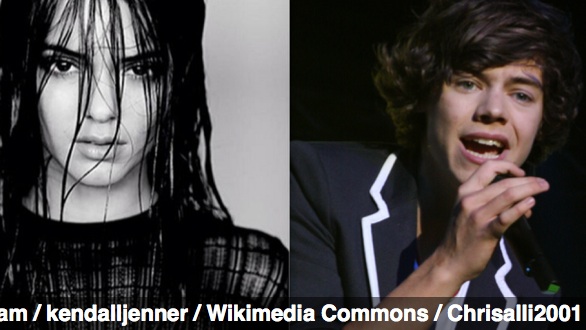 Could reality TV princess Kendall Jenner and One Direction heartthrob Harry Styles be an item?

Well, it certainly looks like it. The two were spotted together at a swanky restaurant in Hollywood Wednesday night, and they even left together in Styles' Range Rover. (Via Daily Mail)

Styles was reportedly in town to promote his band's new album, "Midnight Memories," which will hit stores Nov. 25. (Via Simco Limited / One Direction)

Nothing's been officially confirmed yet.

But 18-year-old Jenner reportedly started following 19-year-old Styles on Instagram almost immediately after their low-key dinner date, if that means anything these days. (Via Daily Mirror)

Both Jenner and Styles have been pretty busy denying potential relationships lately, though.

The "Keeping Up With the Kardashians" starlet has been dismissing recent rumors that she was dating 21-year-old rapper Young Jinsu last month. (Via Us Weekly)

And Styles has been denying some rumors of his own. He told British GQ he and British DJ Nick Grimshaw are not an item, and he's "pretty sure" he's not bisexual. Sorry, boys.

Styles has also, of course, been linked to songstress Taylor Swift, and he's said to be the inspiration for more than one of her infamous man-hating break ballads. (Via The Sun)

Luckily, Kendall's not a singer. She would just talk about Harry on her reality show.