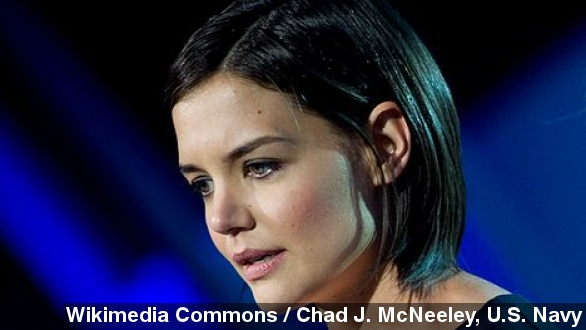 If a new report from Page Six is true, he very well could be. A source told the outlet 35-year-old Holmes and 46-year-old Foxx have been seeing each other since last summer.

But why all the secrecy?

The source claims the couple is keeping things under wraps because Foxx is a friend of Tom Cruise, Holmes' ex-hubby. (Via People)

Cruise and Holmes made headlines when they went their separate ways in July 2012 after nearly six years of marriage. They have one child together, 7-year-old daughter Suri. (Via New York Daily News)

Cruise and Foxx met on the set of "Collateral" back in 2004, so they've known each other for quite some time. (Via Paramount Pictures / "Collateral")

But it wasn't until Holmes and Foxx were spotted by Us Weekly and other outlets dancing together at a Hamptons gala back in August that rumors the two could be more than just friends starting swirling.

Holmes and Foxx denied they were romantically involved at the time.

​​Foxx told ABC last fall any rumors that he and Holmes were dating were "absurd." He added, "In fact, it’s quite hilarious because we simply danced at a charity event along with a lot of other people."

But the rumors kept on circulating, and Page Six claims the couple met up for New Year's and, most recently, the Super Bowl.

Holmes' rep says the actress wasn't visiting Foxx on either of those occasions, and Foxx's camp has refused to comment. So, are they, or aren't they? Looks like we'll have to wait and see.