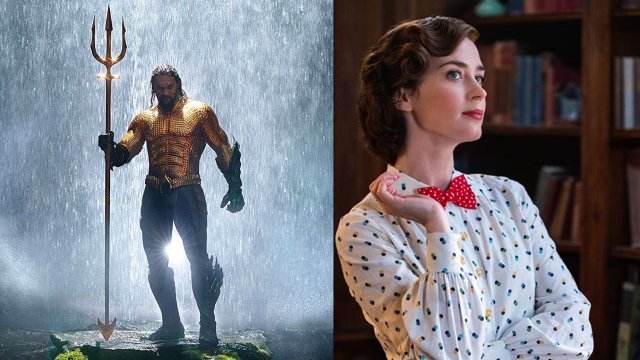 Holding on to the No. 1 spot and taking full advantage of the the holiday season is "Aquaman" bringing in an estimated $51.5 million in its second week out. That weekend total shows just a 24% loss in ticket sales which is fantastic for such a high-profile film.

Last year, "Justice League" ticket sales dropped more than 55% during its second weekend in theaters plus it wasn't performing nearly as well overseas.

Meanwhile, "Aquaman" has made more than $560 million at the foreign box office and will most likely reach a billion dollars before its theater run is over.

At No. 2 this week and showing an even more impressive box office hold is "Mary Poppins Returns" which managed $28 million in its sophomore weekend.

Emily Blunt and company actually saw an increase in ticket sales this weekend compared to its debut last week — a 19% jump. Most analysts blame the Christmas holiday for Mary Poppins sudden change of fortune.

And finally at No. 3 is "Bumblebee" bringing in an estimated $20.5 million in its second week out.

Now, if you're like me you gave up on the 'Transformers' franchise a long time ago, but as this movie proves, you can't judge a book by its cover — or its first 200 pages apparently.

The Transformers franchise has never had a certified fresh film in its ranks, they rarely even snuck above 40% on the tomatometer.

Unfortunately though, Michael Bay has put out so many terrible films at this point, "Bumblee" is having trouble gaining traction at the domestic box office. "Bumblebee" cost $135 million to produce and has yet to crack $70 million in domestic ticket sales.

As for next week, just because he's your adviser doesn't mean you have to take his advice.