People Are Filing Complaints About Kavanaugh's Conduct During Hearing 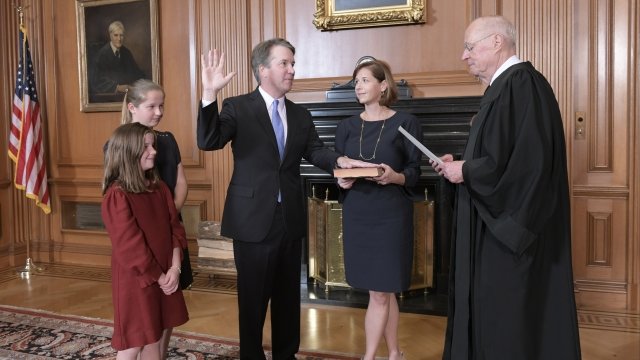 SMS
People Are Filing Complaints About Kavanaugh's Conduct During Hearing
By Ethan Weston
By Ethan Weston
October 7, 2018
The U.S. Circuit Court of Appeals for the District of Columbia is reportedly unlikely to investigate the claims.
SHOW TRANSCRIPT

People have been filing misconduct complaints against Brett Kavanaugh with the U.S. Circuit Court of Appeals for the District of Columbia, according to a statement issued by another judge Saturday.

CNN reports the appellate court isn't likely to investigate the claims since they relate to Kavanaugh's confirmation hearings and not his conduct as a judge.

But The Washington Post reports about a dozen of the complaints were passed on to Chief Justice John Roberts. It's not clear if anything will come of them, since Roberts hasn't referred the cases to another appeals court.

Kavanaugh served on the appellate court since 2006, when he was appointed by then-President George W. Bush.