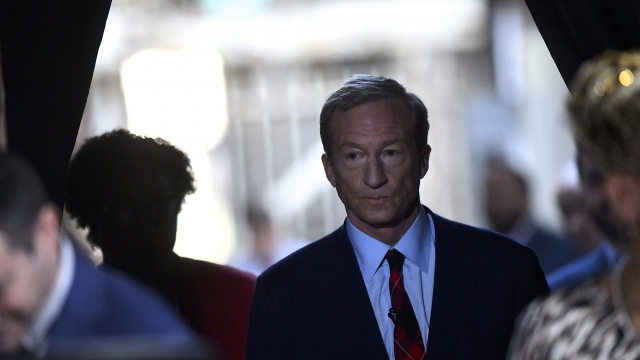 One of Democratic presidential candidate Tom Steyer's aides in Iowa has reportedly made contribution offers to local politicians in the hopes of securing endorsements for Steyer's presidential bid.

The Associated Press reported Pat Murphy, a former state House speaker serving as an adviser on Steyer's Iowa campaign privately offered multiple local politicians the contributions in exchange for their backing. In a statement, Murphy did not address the allegations but apologized for what he called a case of "miscommunication."

Steyer's campaign press secretary said that Murphy had not been authorized to make the offers, and the campaign had no knowledge about them until the AP's report. He said: "Our campaign policy is clear that we will not engage in this kind of activity, and anyone who does is not speaking for the campaign or does not know our policy."

Several local politicians reportedly said that they had received propositions from Murphy, but there is currently no evidence that any Iowans accepted the offer or received contributions from Steyer's campaign as compensation for their endorsements. It's important to note, it's not illegal to pay for the endorsement of a candidate as long as it's reported to the Federal Election Commission.

Steyer responded to the report speaking to voters in South Carolina on Thursday. He said that no payments had been given to officials in Iowa. And said: "We haven't given any money to anyone in Iowa, nor are we planning to. There's no way we would ever do that."

The news comes just days after a staffer on Steyer's South Carolina campaign resigned following the revelation that he had accessed volunteer data from Kamala Harris' presidential campaign.