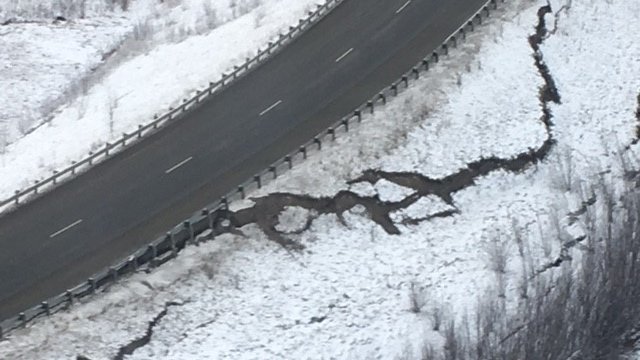 By Briana Koeneman
December 3, 2018
Officials told CNN no deaths, serious injuries or structural damage to buildings were reported after the earthquake.
SHOW TRANSCRIPT

Days after a 7.0 magnitude earthquake shook Anchorage, Alaska, life is slowly getting back to normal for those affected by the powerful quake.

Officials told CNN there were no deaths, serious injuries or structural damage to buildings reported after the earthquake, which rattled the city the morning of Friday, November 30.

The outlet also says airports, hospitals, emergency services and most businesses were up and running on Monday.

But the roads are a different story, especially Glenn Highway — Alaska's most traveled road. By Sunday, crews had made some repairs to the heavily damaged pavement. But the Alaska Department of Transportation still warned drivers to avoid traveling if at all possible.

Alaska's governor gave state employees in the city a day off on Monday to help reduce traffic. And schools in the area are still closed, which should also help the traffic situation.

Hundreds of aftershocks have been felt across the state since Friday's quake. But earthquakes are common in Alaska.

According to the state's Seismic Hazard Safety Commission, 11 percent of the world's recorded earthquakes happen in Alaska. And seven of the 10 largest quakes in the U.S. have taken place in the Last Frontier.