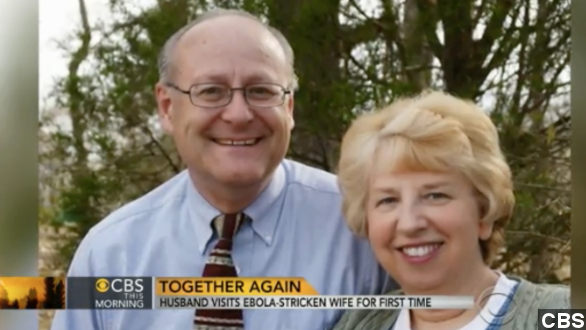 By Sebastian Martinez
August 19, 2014
Nancy Writebol, an American missionary who contracted Ebola, is apparently getting better, according to her husband. The outbreak, however, is not.
SHOW TRANSCRIPT

The reported improvement of an American Ebola patient being treated at Atlanta's Emory hospital made national news Tuesday.

​​The patient is Nancy Writebol, whose husband, David, announced she was getting better after he was cleared from quarantine and allowed to see her. (Video via CBS)

Writebol — along with Dr. Kent Brantly, the other American infected — is being treated with the experimental drug ZMapp, and they're not the only ones who seem to be recovering after taking the drug. Three African doctors also appear to be getting better.

BBC: "'Remarkable signs of improvement' are the words of the Liberian information minister. ... They started taking this experimental drug, ZMapp, last Thursday evening."

Tack onto that the news that 17 patients were recovered after disappearing during looting of an Ebola clinic in the Liberian capital of Monrovia and you might be forgiven for thinking the signs are encouraging. (Video via Euronews)

But the death toll from the outbreak continues to climb, with the World Health Organization announcing Tuesday more than 1,200 people have already died from the virus in West Africa.

And the company that manufactures ZMapp announced supplies of the drug, which had been provided at no cost, have been exhausted.

Then there was this news out of Berlin Tuesday.

​​The Wall Street Journal reports police in the German capital cordoned off a job center ​​after a woman reportedly showed signs of having an infectious disease.

Authorities didn't say what the disease might be, but that didn't stop German outlets from picking up the story, with one even calling it an "Ebola alarm."

Europe has already seen one person die from Ebola: Spanish priest Miguel Pajares, who contracted the virus in Liberia and was also treated with ZMapp.

This video contains an image from Getty Images.