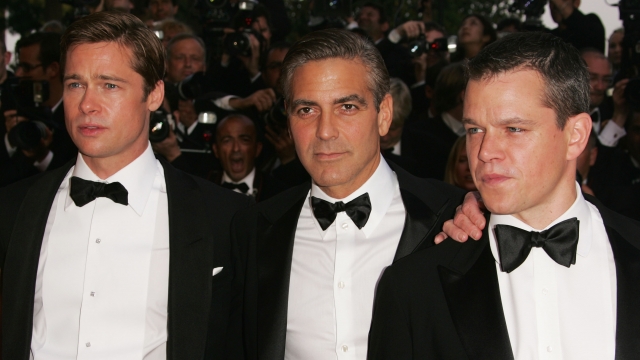 SMS
Along With #HollywoodSoWhite, Study Finds #HollywoodSoMaleAndStraight
By Jamal Andress
By Jamal Andress
February 22, 2016
One author of this exhaustive study on diversity in Hollywood calls the media industry a "straight, white, boy's club," based on the findings.
SHOW TRANSCRIPT

Days before the 88th Oscars, University of Southern California has released an exhaustive (and damning) study on diversity in Hollywood. Here are some of the results.

The study looked at more than 100 motion pictures released in 2014 and more than 300 broadcast, cable and digital series released between September 2014 and August 2015.

For on-screen LGB characters (2 percent), the proportion compared to the national average of those who identify as lesbian, gay or bisexual (3.5 percent) is off by about 1.5 percent.

Interestingly, representation of blacks (12.2 percent) and Asians (5.1 percent) on screen was fairly close to their racial makeup in the country (13.2 percent and 5.4 percent, respectively).

"For us, there was a lot of auditions because you were playing gangbanger No. 1, 2, etc." Michael Peña has said.

But for Hispanics (5.8 percent), the representation on screen compared to the population (17.4 percent) is extraordinarily low.

Behind the camera, the stats are pretty daunting across the board: 87 percent of directors were white, and 13 percent were minorites.

The split by gender is similar, with 84.8 percent of directors being male and 15.2 percent being female. That's a nearly 6-to-1 ratio.

"Selma" director Ava DuVernay and "Belle" director Amma Asante were the only black female directors to release a major motion picture in the time studied.

The only film studios considered "fully inclusive" by the study's authors were Sony and Viacom, thanks in large part to two Kevin Hart films and "Selma." For television and digital distributors, the stats were better, with seven different companies being considered "inclusive."

The study concludes with this: "The film industry still functions as a straight, white, boy's club."

This video includes clips from A.M.P.A.S., NUVOtv, NBC, Lionsgate, Universal Pictures and ABC and images from Getty Images. Music via Frenic / CC BY 3.0.

U.S. Retail Sales Were Flat In July As Inflation Takes A Toll

Why Aren’t There More Electric Vehicles On The Road?

Many Travelers Are Still Dealing With Flight Delays And Cancellations

Gas Prices Have Dropped, But The Relief Might Not Stick