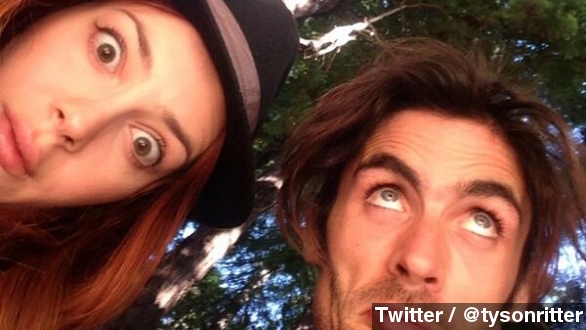 The couple told People magazine, "We feel very fortunate to have started the New Year this way, with an abundance of love and happiness together, shared with all of our friends and family."

Ritter, who proposed back in April, said preparations for the wedding were pretty hectic. (Via Interscope Records / The All-American Rejects)

He tweeted the night before, "@ElleSatine and I have been working our butts off, and now all we have to do is wake up, and get hitched!" (Via Twitter / @tysonritter)

But it seems like all their hard work was worth it.

The beach wedding reportedly included fireworks and wish lanterns, and the bride couldn't have been happier with her beautiful designer gown. (Via Twitter / @ElleSatine)

Now that the nuptials are over, both Satine and Ritter will continue to focus on their acting careers.

And Ritter just landed a role in the upcoming biopic "Midnight Rider." (Via Rolling Stone)