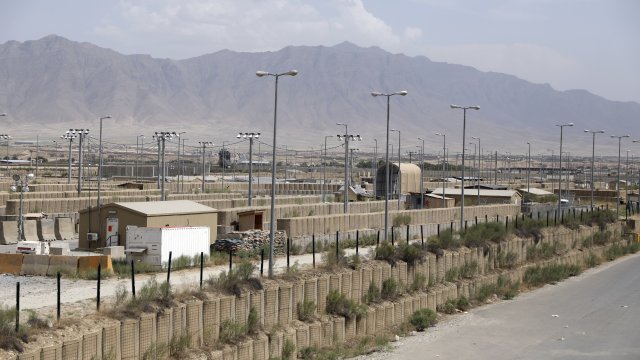 SMS
Afghan Military Says U.S. Left Bagram Airfield At Night Without Notice
By Associated Press
By Associated Press
July 6, 2021
Bagram's new commander said the nearly 20 years of U.S. and NATO involvement in Afghanistan was appreciated, but now it's time for Afghans to step up.

The U.S. left Afghanistan's Bagram Afghanistan after nearly 20 years by shutting off the electricity and slipping away in the night without notifying the base's new Afghan commander, who discovered the Americans' departure more than two hours after they left, Afghan military officials said.

Afghanistan’s army showed off the sprawling air base Monday, providing a rare first glimpse of what had been the epicenter of America’s war to unseat the Taliban and hunt down the Al-Qaeda perpetrators of the 9/11 attacks on America.

The U.S. announced Friday it had completely vacated its biggest airfield in the country in advance of a final withdrawal the Pentagon says will be completed by the end of August.

“We (heard) some rumor that the Americans had left Bagram ... and finally by seven o'clock in the morning, we understood that it was confirmed that they had already left Bagram," Gen. Mir Asadullah Kohistani, Bagram's new commander said.

U.S. military spokesman Col. Sonny Leggett did not address the specific complaints of many Afghan soldiers who inherited the abandoned airfield, instead referring to a statement last week.

The statement said the handover of the many bases had been in the process soon after President Joe Biden’s mid-April announcement that America was withdrawing the last of its forces. Leggett said in the statement that they had coordinated their departures with Afghanistan’s leaders.

Before the Afghan army could take control of the airfield about an hour’s drive from the Afghan capital Kabul, it was invaded by a small army of looters, who ransacked barrack after barrack and rummaged through giant storage tents before being evicted, according to Afghan military officials.

“At first we thought maybe they were Taliban,” said Abdul Raouf, a soldier of 10 years. He said the the U.S. called from the Kabul airport and said “we are here at the airport in Kabul.”

Kohistani insisted the Afghan National Security and Defense Force could hold on to the heavily fortified base despite a string of Taliban wins on the battlefield. The airfield also includes a prison with about 5,000 prisoners, many of them allegedly Taliban.

The Taliban's latest surge comes as the last U.S. and NATO forces pull out of the country. As of last week, most NATO soldiers had already quietly left. The last U.S. soldiers are likely to remain until an agreement to protect the Kabul Hamid Karzai International Airport, which is expected to be done by Turkey, is completed.