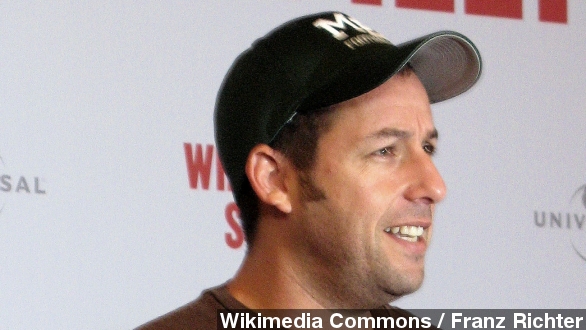 By Briana Koeneman
December 10, 2013
Adam Sandler, Katherine Heigl and Reese Witherspoon made Forbes' list of most overpaid actors and actresses in 2013.
SHOW TRANSCRIPT

Some celebrities may be worth the staggering paychecks they cash every year. But, according to Forbes' most recent list for 2013, a few actors and actresses definitely weren't.

Topping "2013's Most Overpaid Actors" is none other than Adam Sandler. (Via CBS / "Late Show With David Letterman")

According to Forbes, Sandler may be able to rake in $15 million for a movie, but he doesn't always bring in the big bucks for studios.

​And his most recent flicks didn't help much.

"Jack & Jill" cost around $80 million to produce but could only scrape together a grand total of $150 million — not a huge profit margin, considering the studio had to pay for advertising too. (Via Columbia Pictures / "Jack & Jill")

And "That's My Boy" did even worse. The film had an estimated budget of $70 million and grossed only $57 million worldwide. Yeah, that's definitely not good either. (Via USA Today)

But, Forbes does admit that when an Adam Sandler movie is done right, his pay doesn't seem so outrageous.

Sony took a risk with the actor's "Grown Ups 2" and hit the jackpot. The movie grossed $246 million on an estimated $80 million budget, making it one of the funny man's most successful flicks. (Via BuzzFeed)

But Sandler wasn't the only notable actor Forbes picked on.

Former box office queen Katherine Heigl came in second place on the list for epic flops like "Killers" and "One for the Money." (Via Lionsgate / "Killers")

And Kevin James was ranked fifth. (Via Comedy Central / "The Daily Show")

Even Jennifer Aniston made the list, coming in at number 8. (Via Wikimedia Commons / Angela George)

To get these results, Forbes looked at the last three movies each actor starred in during the last three years to June 1, 2013 and calculated a return on investment number for each person based on payday, movie budgets and expenses.