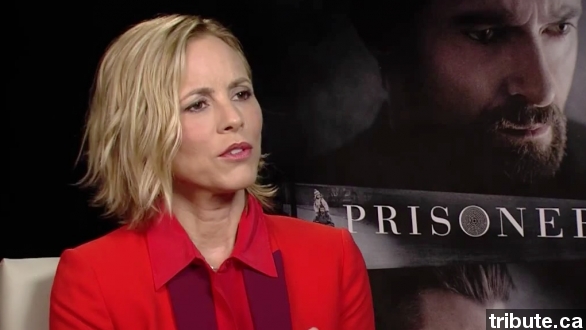 By Lauren Zima
December 2, 2013
The star of movies like &quot;A History of Violence&quot; and &quot;Prisoners&quot; reveals she&#039;s in a relationship with another woman.
SHOW TRANSCRIPT

Actress Maria Bello has revealed she's in a gay relationship, with her best friend.

The actress, known for films like "A History of Violence," and, more recently, "Prisoners," revealed she's in a long-term relationship with a woman named Clare in a piece for The New York Times. (Via tribute.ca)

In the op-ed she calls herself a "whatever," saying she has been in relationships with men and women, and describes telling her son about how her relationship with close friend Clare turned romantic.

In her essay Bello discusses the term "partner." She says she considers her son's father, producer Dan McDermott, her partner in parenting — Clare is her partner and best friend.

Bello also reveals fighting an illness over the summer — saying she came close to death, but Clare, her son, McDermott and more friends and family were by her side. She doesn't give more details. (Via IGN)

These first-person, personal reveals seem to be a growing trend for celebrities.

In May, another actress — Angelina Jolie made headlines with a big reveal in a New York Times op-ed: that she had undergone a double mastectomy.

And over the weekend Joe Jonas opened up about his life as a Jonas Brother, from dating to sexual experiences, in Vulture.