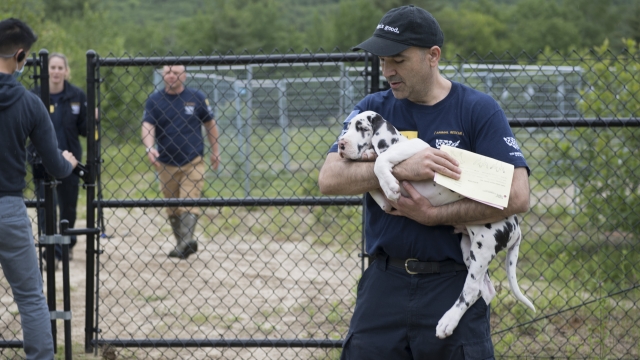 SMS
84 Great Danes Rescued From 'Squalid' Puppy Mill
By Ethan Weston
By Ethan Weston
June 18, 2017
Rescuers saved 84 dogs from a puppy mill in New Hampshire. It was so dirty the dogs had trouble walking without sliding on their own feces.
SHOW TRANSCRIPT

Eighty-four Great Danes were rescued from a suspected puppy mill in New Hampshire thanks to the Humane Society of the United States and local police.

Rescuers described arriving at a terrible scene that smelled like feces, raw chicken and ammonia. The dogs had little access to food or water and many had trouble walking without sliding on the dirty floors.

The Humane Society describes puppy mills as "inhumane commercial dog breeding facilities." Often the mills have little regard for a dog's health, instead focusing on profit.

There are an estimated 10,000 puppy mills in the U.S. and most of them are unregulated. But New Hampshire ranks as one of the top states for its anti-puppy mill legislation and regulations. 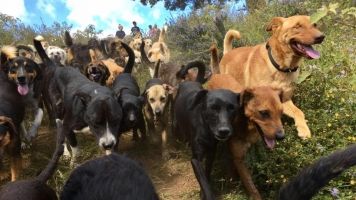 Puppies bred in puppy mills are often sold at pet stores or online. The Humane Society recommends visiting a breeder before agreeing to purchase a dog or adopting from shelters or rescue agencies.

The Humane Society expects to care for the rescued Great Danes for at least a few months before they're ready for adoption.

If you'd like to help the rescued Great Danes, and other rescue animals, the Humane Society of the United States is accepting donations.