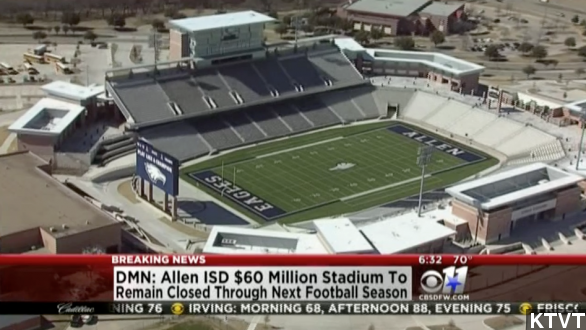 The most expensive high school football stadium in America will not be open for Friday night lights this coming season. The $60 million Allen High School stadium in Texas has been deemed unsafe.

"The stadium opened in 2012, but a few months later, cracks forced officials to close the doors and relocate commencement. ... Investigators say some of the support structures weren't built to hold the weight." (Via KTVT)

"The forensics firm has found certain structural deficiencies at the concourse level, and an earlier report had also found signs of improper concrete work." (Via KXAS)

WFAA reports the forensics team in charge of investigating the evaluating the stadium is not sure yet what is causing the cracks, but it won't be an easy fix.

"The superintendent says they're going to hold the construction company and the architect accountable to ensure that they get the stadium they paid for."

The Dallas Morning News reports PBK Architects released a statement Monday confirming that it and the stadium's builders, Pogue Construction, will foot the bill.

As for the upcoming football season, The Washington Post says Allen High School's games will be played at the neighboring district's stadiums in Plano.

The final report from investigators will be released in June. From there, the school district will decide how best to repair the stadium.