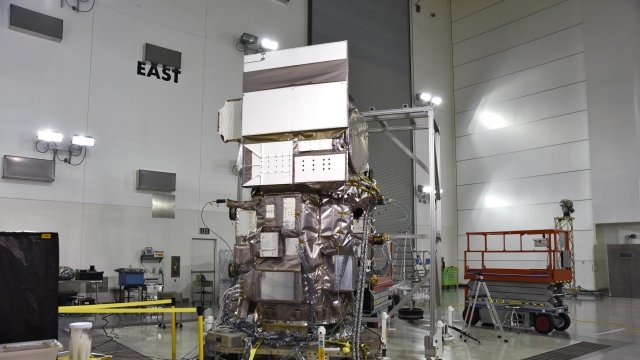 By Sebastián Martínez Valdivia
September 14, 2018
It's called the Ice, Cloud and land Elevation Satellite-2, or ICESat-2 for short, and NASA says it's the "most advanced laser instrument of its kind."
SHOW TRANSCRIPT

NASA is launching a satellite Saturday it says will take some of the most precise measurements of polar ice ever.

It's called the Ice, Cloud and land Elevation Satellite-2, or ICESat-2 for short, and it's carrying a brand new laser measurement system called ATLAS.

ATLAS is made up of a laser that gets split into six separate beams, which fire 10,000 times a second. ATLAS measures how long it takes the photons from the laser to bounce back off the ice and derives the ice height from there.

That means ATLAS is taking 60,000 measurements every second, which in turn means a lot more data. That's data climate scientists could then use to create more accurate projections of sea level rise.

The satellite will focus on ice sheets in Greenland and Antarctica, two of the biggest contributors to recorded sea level rise.