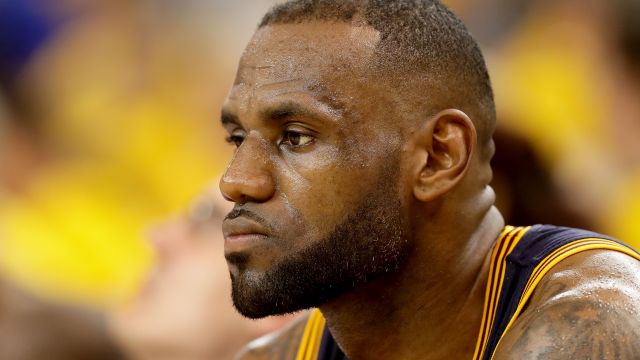 By Jamal Andress
June 6, 2016
The Cavaliers lost the first two games of the series by a combined 48 points. That's the largest margin in NBA Finals history — oh, and it gets worse.
SHOW TRANSCRIPT

Here are five stats that show how badly Cleveland is playing in the NBA Finals:

One: The Cavaliers lost the first two games of the series by a combined 48 points. That's the largest margin in NBA Finals history.

Two: Only three teams in NBA history have come back in the finals after being down 2-0: the 2006 Miami Heat, the 1977 Portland Trail Blazers and the 1969 Boston Celtics.

Three: The Golden State Warriors have beaten the Cavaliers seven consecutive times, dating back to last year's NBA Finals. And the average margin of victory for those seven games is nearly 19 points.

Lastly, reigning back-to-back MVP Steph Curry is averaging fewer than 15 points in the first two games. He averaged 30 points during the regular season.

Cleveland will have another chance to turn things around Wednesday. Game 3 of the NBA Finals starts at 8 p.m. Central time.