3 Things To Know About The Ebola Outbreak's Progression 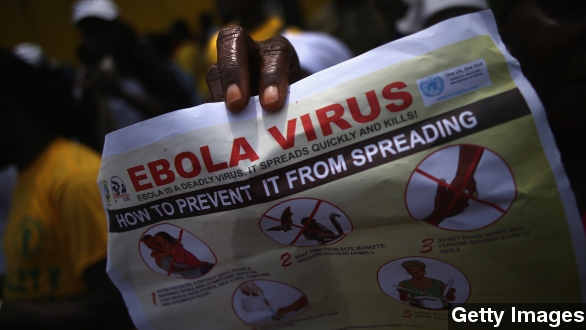 SMS
3 Things To Know About The Ebola Outbreak's Progression

By Briana Koeneman
August 29, 2014
Here are three things you need to know about the deadly Ebola outbreak's progression this week.
SHOW TRANSCRIPT

The United Nations health agency said this week the worst Ebola outbreak in recorded history is still spreading quickly and could infect tens of thousands of people before it's brought under control.

Here are three things you need to know about the progression of the deadly outbreak this week.

First, the World Health Organization says the actual number of Ebola cases in West Africa could be much higher than previously thought. (Video via Euronews)

According to statistics released by WHO Thursday, more than 3,000 both suspected and confirmed cases have been reported in four West African countries, and over 1,500 people have died from the virus.

But the agency says the number of cases in "areas of intense transmission" could be two to four times larger than that. (Video via BBC)

Al Jazeera reports this large discrepancy in numbers could be the result of families hiding infected loved ones and the existence of so-called "shadow zones" medical workers can't access.

Second, the Ebola outbreak is quickly spreading to other areas. Senegal is the latest country to report its first confirmed case.

The country's minister of health told reporters Friday an unidentified man from Guinea, which shares a border with Senegal, was confirmed to have the virus.

Senegal's capital is a major transportation hub for the region, and the arrival of Ebola in the area has some worried the virus will spread even farther. (Video via CCTV)

The BBC notes Senegal had previously closed its border with Guinea and blocked flights and ships from countries affected by Ebola to prevent something like this from happening.

And third, in an effort to prevent the deadly virus from spreading, college students from West Africa who are studying in the U.S. might be subject to extra health checks.

Although health and university officials say the threat of Ebola spreading at an American college is relatively small, some school are refusing to take any chances and will conduct screenings for the virus. (Video via University of Illinois)

For up-to-date information about the Ebola outbreak, including the number of infections and deaths, you can visit the World Health Organization's website.

This video includes images from Getty Images and Google Maps.