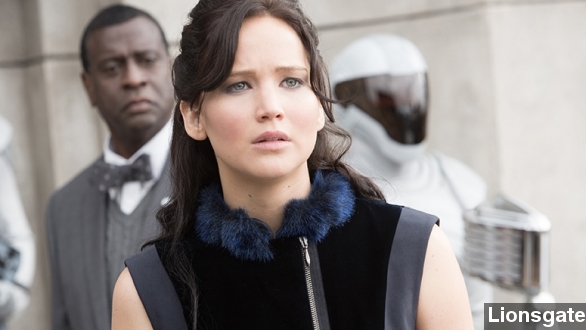 "The Hunger Games" sequel, "Catching Fire," shattered records for both the three- and five-day Thanksgiving weekend box offices with $74.5 million over the weekend and more than $110 million total.

"Harry Potter and the Sorcerer's Stone" had previously reigned supreme at $57.5 million and $82.4 million for each time frame back in 2001.

And a writer for Forbes says that "even if you want to play the inflation game," "Catching Fire" is still the third-ranking debut-weekend earner of all time, behind "Toy Story 2" and "Sorcerer's Stone." (Via Forbes)

In 2012, the first Hunger Games movie raked in about $405 million total. Now, "Catching Fire" is expected to go even further, enough to upset "Iron Man 3" as the top-earning film for the year, according to the LA Times.

So now it's time to sit back and see how "The Hobbit: Desolation of Smaug" will compete with "Fire" and "Frozen" during the holiday season. "The Hobbit" sequel opens Dec. 18th.

Still, we have a feeling Katniss Everdeen could be Hollywood's ultimate victor for 2013.