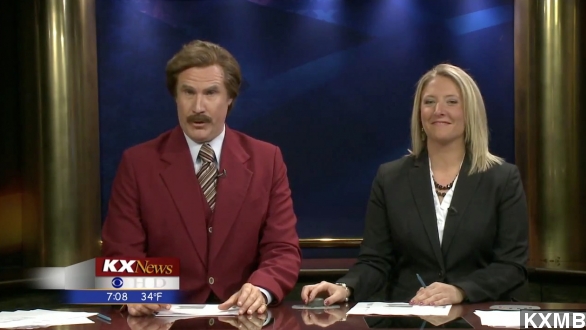 It may just be a cleverly-designed PR stunt, but residents of Bismarck, North Dakota probably didn’t mind when they had a special guest co-anchor their evening news.

In case you didn’t know, that's Will Ferrell in-character as Ron Burgundy, the fictional San Diego newsman and main character of the 2004 hit “Anchorman.” (Via New York Daily News)

While Ferrell’s character is known for operating out of a 1970's newsroom, he joined the team at Bismark’s KXMB for the entirety of the Saturday evening newscast. (Via IMDb)

It’s the latest in a string of appearances Ferrell is making to promote the upcoming sequel to his first flick. (Via CTV)

The first movie focused on how his sexist news team was tested following the introduction of a female anchor. This time around, the plot appears to focus on Burgundy’s introduction to the 24-hour news industry. (Via Paramount Pictures 'Anchorman')

The movie isn’t due out until later this month, but the PR campaign leading up to it stretches back all the way to March of 2012 when Ferrell made an appearance on Conan O’Brien’s show.

Since then, Ferrell has made appearances in-character on everything from Australian TV talk shows to Dodge commercials. (Via TSN)

“Oh yeah, and this glove box I’ve been talking about? It comes standard.”

Anchorman 2 is set to his theaters December 18.