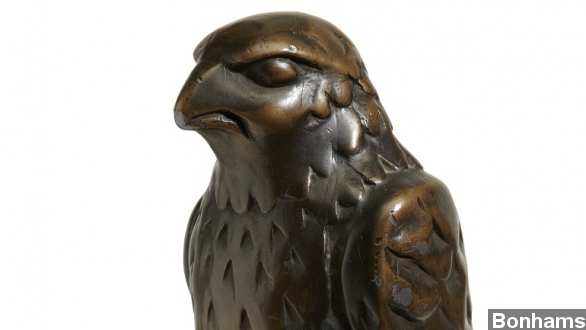 By Jamal Andress
November 26, 2013
During an auction in New York Monday, the famous Maltese Falcon from the Humphrey Bogart movie of the same name sold for a staggering $4 million.
SHOW TRANSCRIPT

Spoiler Alert, the Maltese Falcon is not made of priceless jewels

But one man's trash is another man's treasure and by today's standards, the Maltese Falcon is worth a lot more than anything in your local jewelry store.

During an auction in New York Monday, the famous Maltese Falcon from the Humphrey Bogart movie of the same name sold for a staggering $4 million. (Via New York Daily News)

The 45-pound, 12-inch tall statue was the subject of the famous 40s film and was selected for preservation in the United States National Film Registry by the Library of Congress. (Via KARE)

According to the Los Angeles Times, the statue has been displayed in Warner Bros. Studio Museum, the Pompidou Centre in Paris and the Museum of Modern Art in New York.

Though this item isn't the most expensive movie prop ever sold, it may be one of the smallest in such a high price range.

While earlier this year the original 'Batmobile' from the 1960s TV series sold also for $4.6 million. (Via CNN)

Some pretty good company for a statue that now more than ever is ...

"the stuff that dreams are made of."