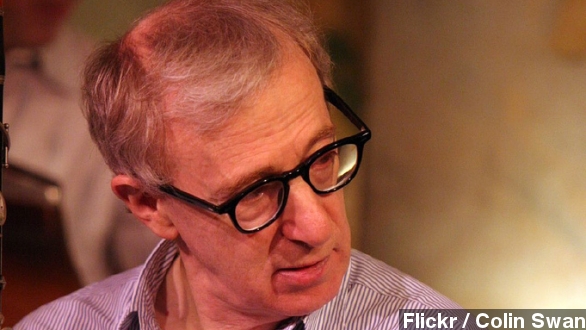 By Matt Picht
February 1, 2014
In an open letter published by The New York Times, Dylan Farrow recounts how her adopted father Woody Allen allegedly molested her when she was seven.
SHOW TRANSCRIPT

Dylan Farrow, the adopted daughter of famed director Woody Allen, published an open letter in The New York Times Saturday detailing the sexual assault she claims to have endured from Allen when she was seven years old.

In her letter, Farrow graphically recounts the alleged molestation, and its destructive impact on her life. "That he got away with what he did to me haunted me as I grew up. ...  Each time I saw my abuser’s face – on a poster, on a t-shirt, on television – I could only hide my panic until I found a place to be alone and fall apart.​"

Allegations of child abuse against Allen first came to light in 1992, during the director's ugly split with Mia Farrow. Slate notes the evidence about the alleged incident is murky: Allen was never charged with child abuse after an official investigation ruled in his favor, but a later custody battle over Dylan threw the investigation's conclusions into doubt.

Dylan first broke her silence over the issue in a Vanity Fair interview published in October. She told the magazine, "There's a lot I don’t remember, but what happened in the attic I remember. ... I was seven. I was doing it because I was scared. I wanted it to stop.

The issue recently resurfaced in the public eye after Allen won the Golden Globe's Lifetime Achievement Award a few weeks ago.

Allen's latest movie, Blue Jasmine, has been nominated for several Oscars, including Best Actress and Best Writing. But in a separate editorial Nicholas Kristof, the Times writer who obtained Farrow's letter, says it's time for Hollywood to stop showering Allen with accolades.

"The standard to send someone to prison is guilt beyond a reasonable doubt, but shouldn’t the standard to honor someone be that they are unimpeachably, well, honorable? ... When evidence is ambiguous, do we really need to leap to our feet and lionize an alleged molester?"

Allen's defenders, however, still argue the director shouldn't be punished for something that hasn't even gone to court. Days earlier, the producer of "Woody Allen: A Documentary" wrote in The Daily Beast: "Accusations make headlines; retractions are buried on page twelve, and coerced accusations are as much a reality as coerced confessions."

Allen's camp has not responded to Dylan Farrow's most recent allegations.